Racial injustice has no place in our society. Read more. 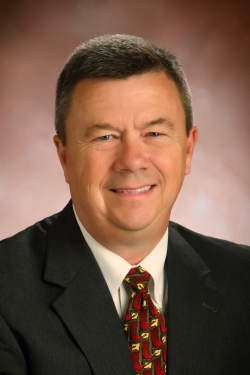 Scott Straight was named to his current position in April of 2017. He has more than 34 years of experience in the electric and natural gas utility industry.

Straight joined the company in 1984 as a mechanical engineer and has been part of, or overseen, nearly every major generation construction project the company has undergone since that time. He moved to an environmental engineer role in 1991 and was promoted to manager of Technical Services in 1996 before being named director of Project Engineering in 2002.

Prior to joining LG&E in 1984, Straight was a design engineer for the Boeing Military Airplane Company in Wichita, Kansas, where he led the design of cruise missile launching systems for the B-52 and B-1 bombers. He began his service at LG&E as a mechanical engineer in the Special Construction Department and oversaw various projects in the retail energy distribution and transmission stations, gas transmission and storage, as well as at every generating station until 1996. Straight has assumed a number of leadership positions within the company including senior engineer over air regulations in the Environmental Affairs Department, project manager, manager of Technical Services, manager of Capital Projects and director of Project Engineering. In addition to attending numerous leadership programs, he holds a Bachelor of Science in Mechanical Engineering from Purdue University and a Master in Business Administration with honors from Indiana University. Straight is a licensed Professional Engineer in Kentucky and Indiana.