We are in this together. Learn more about our COVID-19 actions to help our customers. 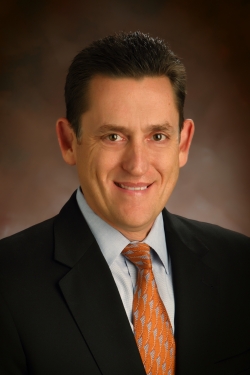 Lonnie Bellar was named to his current position in March 2018. He has over 30 years of experience in the electric and natural gas utility industry.

In his current position, Bellar is responsible for all operations areas including generation, energy supply and analysis, electric distribution and transmission, gas distribution and storage, safety, environmental and customer service.

Bellar participated in a dual-degree program receiving a bachelor’s degree in engineering arts from Georgetown College and a bachelor’s degree in electrical engineering from the University of Kentucky. He completed various management and executive training courses sponsored by the E.ON Academy.  Bellar is currently a board member of Electric Energy Inc. and Ohio Valley Electric Corporation.  He also has completed executive education courses at the Harvard Business School and the Tuck School of Business at Dartmouth.  Bellar recently was named to the University of Kentucky College of Engineering Hall of Distinction, which recognizes alumni with distinguished engineering and professional accomplishments, outstanding character and commitment to community service.

Bellar is a board member of Electric Energy Inc. and Ohio Valley Electric Corporation. He serves on the board of directors for the American Gas Association and Southern Gas Association, along with representation on various AGA and SGA working committees and groups. He also participates on the Greater Louisville, Inc. – board of directors, executive committee and committee membership and the University of Kentucky Engineering School dean’s advisory council.